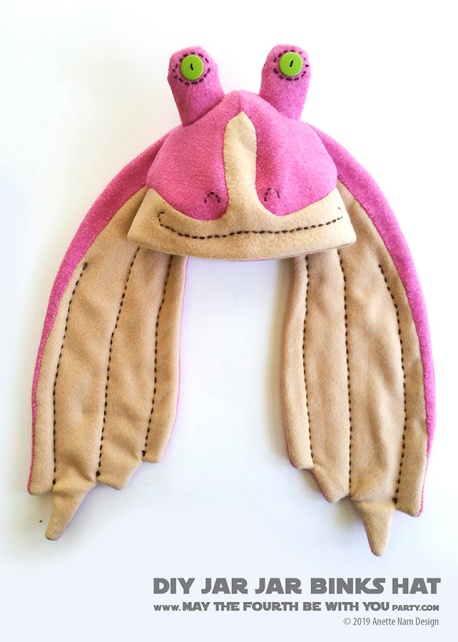 I wore this hat for 2 of the days at the recent Star Wars Celebration Chicago 2019.  Tons of people asked where they could get one… so I promised I would post the instructions.  Enjoy!

First I should explain a little bit about it.

Jar Jar is for kids!  He is funny, lovable, and totally relatable to little kids who themselves accidentally get into trouble and trip over things. Which brings me to the hat. The idea behind the hat was to show Jar Jar as the kids see him.  Funny, friendly, and relatable.  Like a giant stuffed animal that you can play with for hours.  And judging by how many people at the Celebration came up and asked if they could touch the ears, I think I succeeded. I, and the hat even made it into the official The Best of Star Wars Celebration video – check it out here.

(UPDATE: I and the hat also appeared in a starwars.com article featuring my Star Wars creations.  Click here.) 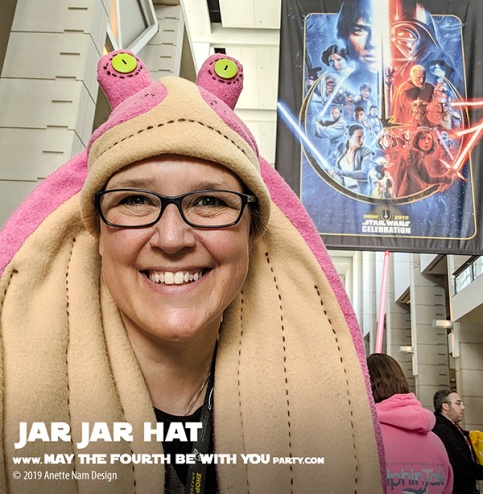 To complete the look, I also made the vest and the wrap belt around his waist, and I will be posting the instructions for those in a separate post.

Disclaimer – as always, I rarely plan these DIY projects out ahead of time. I start, then make things up as I go. However, I will try my hardest to recreate the steps.  Feel free to ask me any questions in the comments. 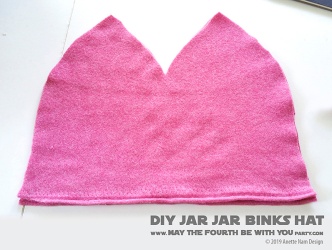 I used an old fleece hat as the pattern for the cap.

Fold the hat in half and line it up on the fold of 2 pieces of fleece (layered face-to-face).  Make sure that you add a 0.5″ extra for the seams, and at least 2″ for the hem at the bottom.  Also, since the hem of the hat will be pretty thick, you might want to add a bit extra in width so the hat doesn’t end up too tight (like mine did).  (On mine, each piece was about 12″ wide by 11″ tall at the tallest tips)

Fold each piece of cut fleece in half (face inward), pin, and sew the “v” shape in the middle together.  Repeat with the other piece. 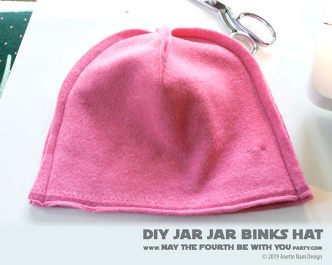 Again, making sure the 2 pieces of fleece are face-to-face, pin and sew along the edge of the top of the hat. Leaving the bottom open of course.

With the hat still inside out, try on (for size), fold, pin, and sew the hem on the bottom of the hat. (I had a 2″ hem to make sure it was nice and sturdy) 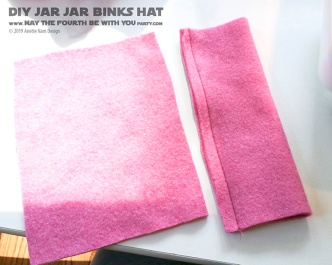 Cut 2 identical rectangles (about 5.5″ wide x 7″ tall). Fold each piece (face-to-face) and sew together into a tube. 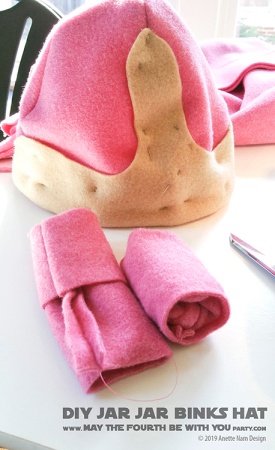 Take the tube and fold/turn it halfway out and over itself.  (The extra layer of felt is what will make the eyes stiff enough to stand up on their own).

On the front, sew the buttons with black wool yarn or floss. (The seam should be in the back)

Tuck the corners into the eye tubes and sew shut by hand. (they should be about 3″ long by 2.5 wide when done)

Pin the beige fleece in place, and sew it by hand.  (I sewed the eye-tubes on first, but it really doesn’t matter which order you do it)

Fold a little hem on the eye-tubes (at an angle), and pin in place on the top of the hat.   If you have a friend who is not not afraid of needles, this is the time to use her or him.  It is WAY easier to pin the eyes in place if someone else is wearing the hat. (Tip, set your friend up to watch The Phantom Menace.  By the time she or he is done watching, you’ll need her/him again.)  Note, that the eyes are not centered front-to-back.  They are a set a bit forward of the centerline.

Then sew the eyes in place by hand. 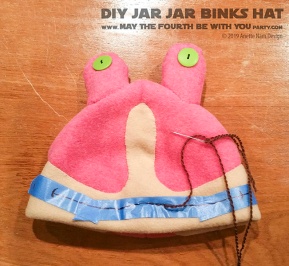 To avoid having to draw on the fabric, I covered the mouth area with blue tape and drew the mouth on there. Sew with brown wool yarn (floss works too) through the fabric and the tape. Remove the tape carefully as to not rip the stitching.

The area around the eyes and the nose I just did by sight.

Here is the finished cap.  The outside… 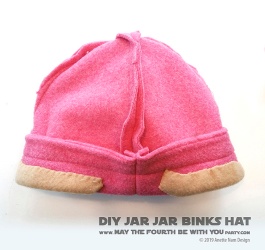 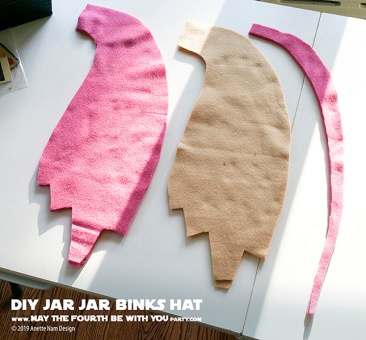 Fold the pink and the beige fleece in half (face-to-face).  Cut 3 identical pairs of ears – 2 pink pairs and 1 beige, one pair at a time.  (Trust me, you don’t want to try to save time by cutting the 6 layers of fleece at once – they’ll slide too much making the pieces uneven)  (The pieces were about 24″ long by 11″ wide, the ear lobes being about 8.25″ at their widest point)

Then cut 2 pieces of the pink “trim” for the ears (almost 2″ wide at their widest point).

Layer the fleece like this:  Pink (face up), another pink (face up), pink trim (face down), beige (face down).  Make another fleece sandwich facing the opposite direction. (The reason there is an extra layer of pink fleece, is to make the ears a bit stiffer, and to achieve that quilted look.)  Then pin in place.

Sew together the entire outside arch, the bottom scallops, and most of the inside arch.  Leave a few inches of the inside arch, as well as the part of the ears that will sewn to the other ear, open. (You’ll need this open to turn the ear right-side-out.

Use your judgment whether you want to cut some of the extra fabric off the seam safety around all the sharp edges, outside of the seam.  If it looks like the fabric will bunch up too much, then go ahead, just be careful not to nick the seam itself.

Turn the ears right-side out.

Use a chopstick or a knitting needle to poke the points of the scallops, by putting the chopstick into the ear and even them out as much as you can.  IMPORTANT NOTE, YOU PUT THE CHOPSTICK INTO JAR JAR’s EAR…NEVER EVER EVER PUT A CHOPSTICK OR KNITTING NEEDLE INTO YOUR EAR…  Now, where were we?

(Note, I much prefer using a Japanese style chopstick for this (if you have one). Knitting needles work, but it is just too easy to accidentally punch through the fabric and the seam with the much pointier knitting needle)

Take the pink trim piece and neatly fold it over the the front of the ear.  Pin in place, and sew by hand.

Sew the brown lines with brown yarn.  (Note, I decided I wanted to have it look more home made, so I made a point of making the knots visible.)

Tuck the base of the ear in on itself, and sew it closed by hand. Repeat with the other ear. 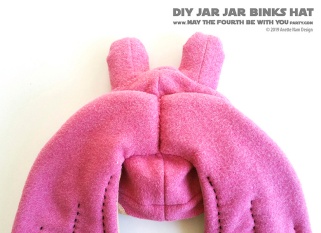 Now, it’s time to go and check if the movie is over yet, ‘cuz you’ll need your friend to come and try the hat on again.  While she/he is modeling, pin the ears in place.  (Safety pins are great for several layers of fleece).  Sew the ears in place by hand.  I sewed them in the middle, top and bottom, but not on the outside, because I wanted them too hang more naturally.

That pretty much does it!  As I said before, feel free to ask me questions in the comments.  And if you make your own, I would LOVE to see how it turns out.

I always use double sewing thread for projects like this.  It holds better.

If I was to make another one, I think I would double up on the pink fleece on the cap itself.  Since the hat is pretty tight, everything stays in place, but I think it still could have benefitted from a bit extra structure to hold up the ears. 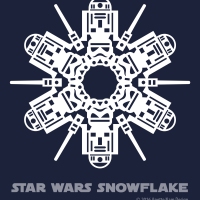 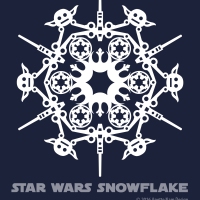 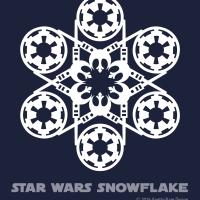